I think we can all agree that the last year has been…strange. At best. We got accustomed to a new rhythm–one that often involved working in sweatpants, constant Zoom calls, and spending our vacation savings on Uber Eats.

And now things are starting to change again.

At Lulu, the last year has been a whirlwind on top of the pandemic. We’ve launched a whole new website and moved to a new office in the last 12 months! With safety restrictions lifting, we’ve slowly been moving into our new space and getting to know the building.

A Message Of Inclusivity

Erin, our VP of People, wanted to find a way to acknowledge Juneteenth. Not just outwardly, but internally as well. Luckily for us, she had a connection to Eugene Taylor, the Drum Prophet.

Eugene was able to join us on Friday, June 18th to play his drums, teach some of us to play, and share stories about his mission. He didn’t speak specifically about Juneteenth or history; instead, Eugene spoke of the ways he’s learned to lift the spirits of others.

The timing was kind of perfect. We’d all slowly been getting used to working in the office again, and everyone was really looking forward to the opportunity to spend some time together as a team.

We’d all slowly been getting used to working in the office again, and everyone was really looking forward to the opportunity to spend some time together as a team.

As Eugene set up his amp and drums, we began to congregate for the first time since before the pandemic. Sure, we’ve had plenty of virtual meetings ranging from company updates to happy hours. But nothing can replace actually being there with people and listening to live music.

Not wasting a moment, Eugene dove into playing his drums and telling us all what to expect from his time with us: fun and games.

Sure enough, he led us on a game of musical chairs that ended dramatically with two of our Lulu Junior team members circling-it-out to see who would win. Then Eugene whistled some old sitcom theme songs and we tried to guess the show.

Meanwhile, he kept a rotating team of drums playing backup for him.

Our afternoon fun ended with a bit of a dance party. While only some of the team got up and danced (I admit to being reluctant to dance myself), the energy was pervasive. It was a great opportunity for the Lulu Team to come together, have some fun, and actually see each other again for the first time in a long time.

Eugene Taylor a.k.a. the Drum Prophet has been entertaining audiences with his musical talents for over 20 years. Born in Memphis, TN, he now lives in Wake Forest, North Carolina and he’s increasingly becoming one of North Carolina’s most sought-after local performers.

His music is soulful and inspiring, relying on drums, whistling, and snapping to open listeners’ hearts and minds. Take a moment to learn more about Eugene, check his latest album, and see where he’ll be performing next. 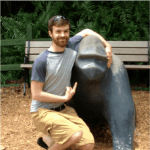 Paul is the Content Marketing Manager at Lulu. When he's not entrenched in the publishing and print-on-demand world, he likes to hike the scenic North Carolina landscape, read, sample the fanciest micro-brewed beer, and collect fountain pens. Paul is a dog person but considers himself cat tolerant.