“The 45 Presidents” is an 84-page, large format activity book featuring a caricature of each president. Written by former advertising executive turned TV producer, Toni Steedman Zelickson, and illustrated by nationally renowned caricature artist, Jeff Mangum, the workbook is a sure hit with kids. It includes presidential trivia, First Lady matching, and iconic images such as Air Force One, the White House, and Mount Rushmore. “The 45 Presidents” book is part of a multi-media trio! You can also fine a new original song by the Raggs Band. And a music video by Band including the Emmy-Award winning characters from the Raggs children’s TV series.

2017 Silver IPPY Award Winner and Homeschool.com Summer Resources Award Winner! The 45 Presidents is the newest and most up-to-date fact and activity book about the U.S. presidents, including the most recent 2016 election. With 84-pages of original caricatures of each president, historical facts and activities, The 45 Presidents entertains and educates children of all ages about the men and women who shaped our country. “The 45 Presidents” is also a new, catchy song and music video, which reinforce the lessons learned in the book. 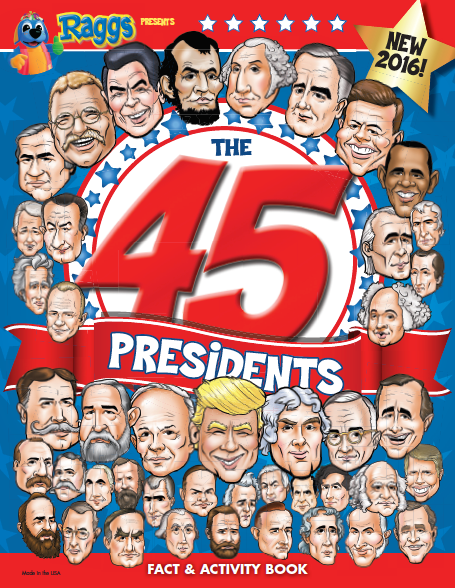 Early this year, “45 Presidents” was awarded a Silver IPPY from the Independent Publishers Association! And it was handpicked by Homeschool.com, placing second in the multi-media category from a field of nearly 5,000 worldwide entries!

The book is a companion to the Raggs multi-media library. That includes an extensive audio library of over 300 tracks and video located at www.raggs.com. Kids can have fun learning about the history of American Presidents, with fun facts, illustrations, and a historical timeline. Summer is here, and it may be tough to think about learning with the sunshine and vacations on the horizon. But now is the time to get ready for the fall and keep your kids interested and excited to learn about the history of the USA’s leaders!

The accompanying music videos are free-to-view on YouTube, and supplement the book with more ways to learn about the Presidents. You can find the videos at the book’s home page, the45presidents.com.

Raggs is an Emmy Award-winning, musical preschool series about five colorful pups who learn life lessons though an innovative mix of live action stories, music videos, concerts, cartoons and interviews with real kids. With over 200 episodes, 300 original songs and animated new media music videos, Raggs is available worldwide in English, Spanish and Portuguese and has begun dubbing in 15 additional languages for distribution in 100 countries in 2017. The Raggs brand includes CDs, DVDs, toys, books and live shows, including a partnership called “Play at Palladium with Raggs” with the Palladium Hotel Group at resorts in Mexico, the Caribbean and Brazil.

The original characters were created by Toni Steedman, a Charlotte, NC, advertising executive, for her then six-year-old daughter Alison. Raggs and all rights are owned by Blue Socks Media LLC, Charlotte, NC. For more info, go to www.raggs.com.