North Carolina State women’s basketball fans know the name Kay Yow. As the team’s coach, she achieved more than 700 wins over her 34-year career, became a Hall of Fame inductee, and coached the 1988 women’s Olympic team to their gold medal win. In 2009, Yow passed away from breast cancer after battling the disease for two-plus decades. To residents of the Tar Heel state, Yow is a true legend whose story MaryEllen Williams wanted to tell:

Living here in Raleigh, NC, everyone knew the name Kay Yow but what made me want to know more about her was the fact that she was said to be a very special person, someone who was at a higher spiritual level than most of us. As I looked into her more I realized she was known worldwide. I wanted to find out her roots and what made her stand out among the best.

Before she could write Kay’s story, which would ultimately be released as her nonfiction book Triumph, MaryEllen spent a considerable amount of time doing research. She watched videos online, read all the newspaper articles she could get her hands and contacted the person in charge of Kay’s estate to get consents and releases as well as to option the story to the beloved coach’s life. Once she identified the key figures in Kay’s life, MaryEllen sought them out. Kay’s friends, family, and former staff members answered MaryEllen’s questions and thus the narrative was born.

Once she completed her manuscript, MaryEllen decided to skip traditional publishing altogether and go independent for one reason alone: timing. When told it could take years to get an agent and a book contract, she turned to Lulu, which ended up being, “the best thing I ever did because they have bent over in their support for this inspiring project,” said.

Now Triumph: Inspired by the true life story of legendary Coach Kay Yow can be purchased through Lulu.com as well as both Amazon and Barnes & Noble’s websites.

TRIUMPH is an inspiring true-life story of a girl from a small town who became a world renowned legend. It begins in a time and place where women had few options and sports were a man’s world. As a child Kay loved playing basketball but like many young women of that time she anticipated life as a teacher. Through the encouragement of her parents and principal, she changed her expectations and raised the bar on what women could accomplish. Kay defied these limitations to become a successful Basketball coach, a hall of fame inductee, and an Olympic gold coach. With her many successes there would be even bigger challenges. Her fiercest opponent would become her ongoing battle with breast cancer. Coach Yow faced these trials head on with grace, dignity, and her deep faith. Kay’s love of people, her sense of humor, and her undying hope were contagious. She believed “When Life Kicks You, Let it Kick You Forward”. This story will inspire you, give hope to you and let you find the hidden hero within yourself. 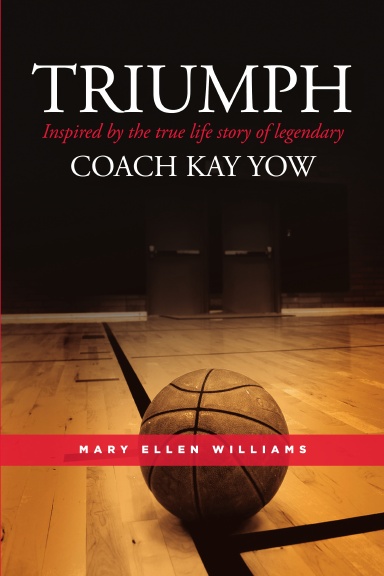 To promote Triumph, MaryEllen hired a publicity firm to do a six-week PR campaign. But MaryEllen isn’t only relying on them; she knows that an author must also be her own biggest advocate and so she’s been hitting the pavement in her hometown of Raleigh. Recently, Quail Ridge Book Store and . State Bookstores agreed to take copies of , which MaryEllen knows is a triumph in and of itself.

Next up for MaryEllen is a screenplay of Kay’s story, which she’s been dreaming about even before she started the book. It’s been an incredible journey she admits — and she’s learned quite a few things along the way.

My tips to any author are to work hard, ask anything and everything about your subject. Persevere and never give up.  Every hurdle you meet can be overcome.  Believe in yourself and your project.  You are, as I said, your biggest advocate.  Get excited. It’s contagious.